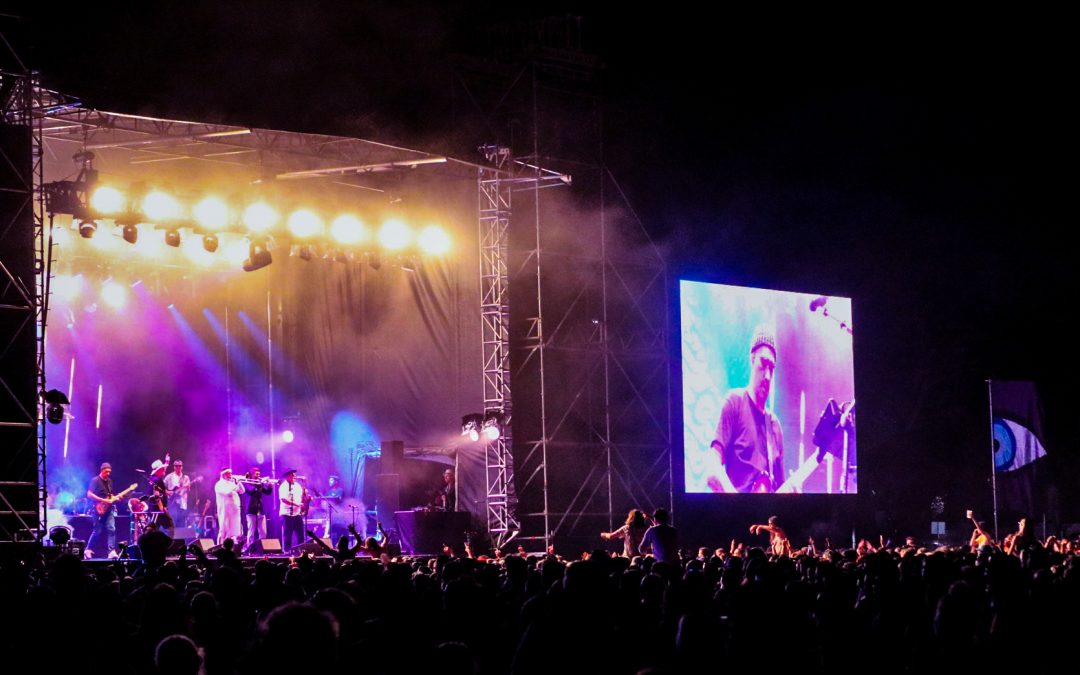 Western Springs and a great lineup on a beautiful summer day, what more could you want? Though the heat was crazy, as long as you had sunblock on, you would have been good. The crowd trickled in as the gates open. People found there spots, grabbed food & drink and settled in.

First to take the stage was the incredible wahine that is Bailey Wiley. Joined onstage by a 3-piece band of Tom Broome (drums), Marika Hodgson (bass) and Guy Harrison (keys). She performed most of the tracks off her self-titled EP as well as a few older tracks. The heat was clearly hitting her a bit as it shone directly on the stage. But she soldiered on and performed a great set. Though the bright orange pants probably didn’t help the heat, she looked great with a white singlet to complete the look. You wouldn’t know she just had a baby as she paced the stage all smiles, delivering a flawless vocal performance. “Thank you for coming early and braving this weather. It is so hot!”

Next to take the stage was JessB. Now if you’ve seen JessB perform before, you know this isn’t a set to sit and chill too. The crowd seemed to realise that as she dove into her set with Half Queen on the decks. People moved more and more closer to the stage, just made the use of the beautiful day and danced with their friends and family. Even I had to dance while filling up my bottle and the refill station. Then if JessB and Half Queen weren’t hyping you up enough, backing dancers took the stage and showed you how you should be getting down. It felt like it really just took the performance to another level and really encouraged you to dance. But she didn’t stop there with Silva MC also taking the stage to perform with her as well. These wahine really came to get things done. She performed tracks off her first release ‘Bloom’ as well as her new most recent release ‘New Views’. Ending her set on ‘Mood’ was the best way to finish it all off.

At this point it felt like the sets were just pumping out one after the other. But it really felled the day flow nicely. More and more people continued to settle in and start having a great night. There were quite a few food options and a full bar. Though I think they definitely needed more shade options as the 2 Red Bull tents weren’t really enough as people took up camp there.

To mix things up even more Avantdale Bowling Club took the stage next. If this name doesn’t sound familiar to you, maybe the name Tom Scott will. The band gave an incredible instrumental rendition before he took the stage. The full band really gave so many different elements to the the performance and accompanied Tom’s verses so well. There were clearly some people who were just as excited to be seeing him perform as a large group moved closer to the stage and you could hear them rapping every word. Tom gave an incredible performance and you could see him feeding off the band just as much as we were. I was with my friend who hadn’t heard his music before and you could see how the lyrics were quite shocking in some ways to her as he speaks on a lot of really subjects from his life and what is going on in NZ. I somewhat wonder what the rest of the crowd thought. Personally I found it so great and really flowed nicely into the next act.

L.A.B took the stage next and gave that reggae-type vibe that everyone seemed to want. The band were clearly enjoying the sun and having a great times themselves. There really was something positive and fun about all these sets. The crowd had really started packing in even more and the pathways really started becoming a necessary way to move around at this point. Though they were a bit narrow and would get a bit congested with people further into the night. It had started cooling down more by this point and people really started to have fun. I suppose it was easier to dance around without having the heat affect you too much. I think L.A.B were definitely what the crowd needed at that point to really just allow the crowd to chill and vibe along.

To pick things up a bit more CHAII took the stage. Draped in what deepened to be a full Louis Vuitton outfit, she only performed on part of the stage as the rest of the stage was being set up for upcoming acts. CHAII picked the crowd up a bit more but I particularly loved that she gave me more energy to get through the rest of the night. I don’t know if many people know of CHAII so it was awesome to see her be billed so high up, allowing more people to hear her.

Now this next performance, I did not know who David Rodigan was. But upon set start I realised he was a DJ act. From the crowd and artist’s reaction I think there is a lot more to this man that I don’t know. I have to admit, I was a bit confused about who this elderly gentleman was that was playing a mix of reggae tracks as well as tracks to get down too. But it was honestly a really good set with a range of great music as well as tributes to people like Bob Marley and stories of his journey’s. Though I felt like he almost jumped on the mic a bit too much, he was all energy, coming to the front of the stage to dance a bit and hype the crowd.

The sun was nearly set at this point as Fat Freddy’s Drop took the stage. Western Springs Outer Fields were packed with people! Kids were running around collection Globlet cups which could be returned for $1 per cup or you could donate that to MusicHelps, which I thought was amazing. I really don’t know what to write about Fat Freddy’s to be honest. It’s Fat Freddy’s Drop. A part from the different setlist, they were essentially the same as the last time I saw them. Great energy, awesome vocals and just a positive vibe. The circle image of the new album cover adorned the back of the stage all day and the stage was lit in an array of colours too match. They put on a great set, seem to just really enjoy themselves and give the crowd a great night. That fact that it was a family event made it almost more enjoyable as the crowd had such a range of different people.

I left about halfway through to beat the rush but by that time I was also feeling quite tired. I don’t know if maybe it was almost too long of a day but it was meant to be somewhat like a festival. The heat also probably didn’t help. It was a great lineup and I loved seeing so many people out supporting local music! I may not have lasted the whole night but you really have to appreciate having a gig that really had something for everyone.