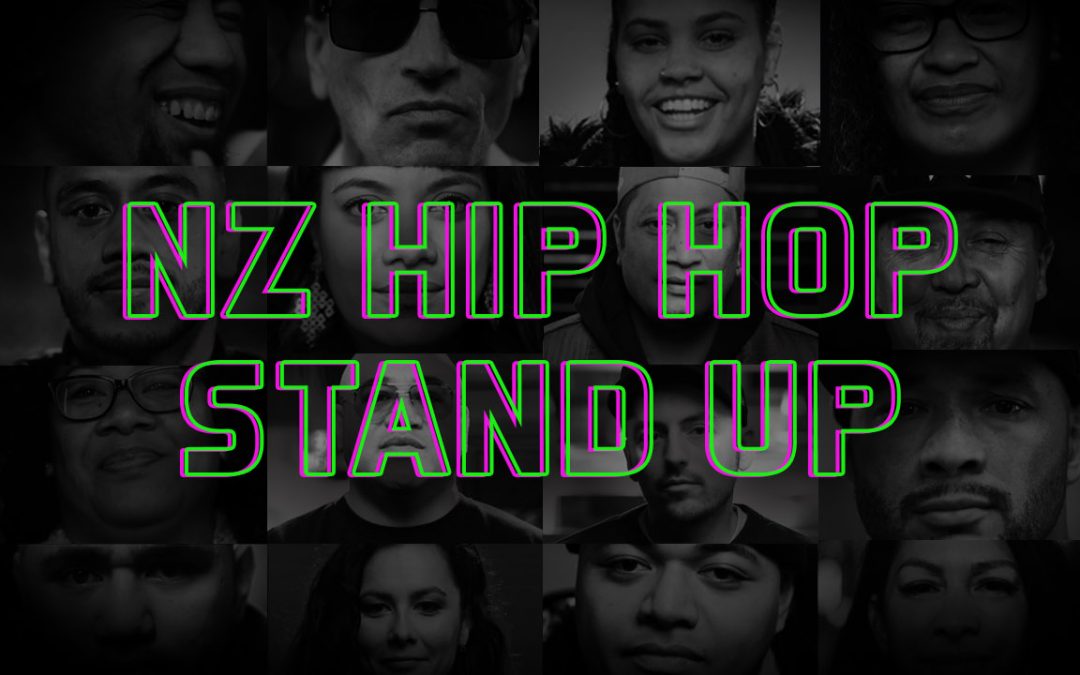 SERIES SYNOPSIS
NZ Hip Hop Stand Up is an exploration of some the greatest songs released over the 30-year history of hip hop in Aotearoa.

Starting in 1988 with ‘E Tū’ by Upper Hutt Posse and ending in 2019 with ‘Ready or Not’ by teen sensations Church & AP, the series talks to all of the major players involved in some of the most influential and loved tracks this country has ever produced.

It’s a celebration of an art form that’s helped shape New Zealand, featuring interviews with over 30 artists from across the 30-year history of Aotearoa hip hop.

Artists share the stories behind their songs, their experiences and the positive effects of hip hop in communities all around Aotearoa. Which, in turn, created role models for many young New Zealanders searching for a culture that resonated with them.

Each episode features a significant song, with artists of all generations discussing its importance and relevance to New Zealand and NZ hip hop.

The series is directed by Chris Graham, who made some of NZ’s most well-known and groundbreaking music videos for artists including Scribe, King Kapisi, Dei Hamo, Smashproof and Home Brew.

Three of the biggest names in Aotearoa hip hop; Ladi 6, Scribe and King Kapisi, acted as consultants on the series.

EP1: ‘E Tū’ – Upper Hutt Posse
This episode celebrates New Zealand’s first hip hop track, E Tū by Upper Hutt Posse, featuring interviews with members Te Kupu, DLT, Teremoana Rapley and Bennett Pomana. The band are still creating music and they tell us about ‘E Tū’ and its significance, both when it was released in 1988 and what it still means today.

EP2: ‘In the Neighbourhood’ – Sisters Underground
Brenda Pua and Hassanah Iroegbu met at school when they were 13 and kick started their singing careers when they won a grant from the Manukau City Council. They were introduced to music producer Alan Jansson and released ‘In the Neighbourhood’. The song hit the charts both locally and in Australia and Europe and remains a firm New Zealand favourite today.

EP4: ‘If I Gave You the Mic’ – Sheelahroc
A fiercely proud all-female hip hop group founded in Christchurch by Ladi 6 and Voodoo Child. They later asked Ladi’s cousin, Tyra Hammond, to join after they saw her perform at a shopping mall. This episode looks at the way the group encouraged females to get involved with hip hop and possibly one of the worst music videos ever made in New Zealand hip hop history.

EP5: ‘Stand Up’ – Scribe
Scribe and P-Money tell us about the development of ‘Stand Up’, one of New Zealand’s most significant songs, hip hop or otherwise. The song broke records, knocking international artists off the top of the Music Charts on its way to a record breaking 12 weeks at the top of the chart.

EP6: ‘Brother’ – Smashproof
We meet Sid Diamond, Tyree Tag and Deach from Smashproof who delve into their song ‘Brother’ which was a metaphor for South Auckland at that time. The band made headlines when they re-enacted a murder that had taken place in Manurewa in the music video for the song, proving that hip hop could speak to and about New Zealand in a way that no other art form could.

EP7: ‘Ready or Not’ – Church & AP
Still only in their teens, Church & AP’s song ‘Ready or Not’ managed to hit it big all around the world thanks to the connectivity of the online world in 2019. The most shazamed song in New Zealand before it was even officially released, then tweeted by BBC1 Xtra, the landslide of retweets ensured the reach of their tune stretched from New Zealand to Britain and everywhere in between.