Interview: Ranuimarz and a new beginning through music! 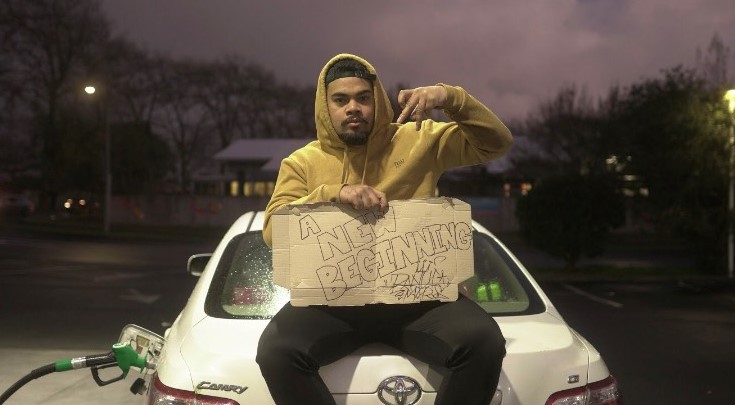 Who is Ranuimarz?
I’m just a young Māori/Polynesian rapper from Ranui. Ranuimarz is the representative for all native and indigenous people, even those who aren’t of my culture or colour. From the depths of poverty and the rise of something special.

How long have you been creating music for?
I’ve been rapping since I was about 13, when my mum left my dad. That was the spark as far as recording music. Professionally I’ve been doing it for 3 years.

What is your creative process like when creating music?
Usually there isn’t a process. I just write what’s on my mind on the spot. I never brainstorm what I’m going to speak about either. It’s all from my heart. Same thing with food, you put love into it and it’ll taste way better.

You recently released the video for ‘A New Beginning’, it starts off in such a strong way, where did the idea for the video come from?
Man, Peter Pedro I tell you. The guys amazing with ideas. He wanted to captivate something real deep and meaningful and what better place to do it then home right. I really wanted to show the unfortunate life we live. That house holds a lot of depression in it, from being racial profiled to finding something that can hopefully give me what I need. A New beginning.

The track itself is quite heavy in regards to identity and also mental health. Is this track quite recent? How did it come about?
I wrote the track on the first of January this year (new year, new beginning) so it all made sense. How I came about it is quite personal but the last two years I went through a lot of downs. I was struggling a lot mentally after loosing a younger brother. I’m happy that the track has been speaking to people it really brings warmth to my heart.

You touch on identity and culture in both your imagery and music. Is it important for you to have your culture and those identities in your music in your music?
Yes, it’s very important because culture is what makes you who you are. It’s your identity, its what’s in you to be Māori, to be strong to have the kaha to thrive in a system built to destroy us. Expressing the culture through music will get the attention of those who have experienced what you’ve been through and one day it might become something of interest to people who have never seen or heard about Māori culture. It really is a beautiful thing.

You also touch on the culture surrounding those in the lower to middle class or who are going through a difficult time. Is that to bring that more to the forefront for those in NZ who aren’t aware or are ignorant, or is it more just to reflect on times that you’ve been through?
Both, for myself and for the rest of Aotearoa to reflect on. I come from there, that’s why it’s important for me because I don’t want to go back to raw weetbix and peanut butter. I’ve had my hard time, now I want to bring that into music and share it with those who are unaware of what we go through. ‘A New Beginning’ is a statement telling the world that we are still here in the same position as yesterday and hoping tomorrow things will get better.

I’m interested to know how you view the music scene here. Because I personally think there are so many artists such as yourself who have been doing this thing for a while and constantly creating music but are almost ignored or brushed off. Would you agree with that? Or do you prefer it that way?
Totally agree, Aotearoa hip pop is blindfolded by a lot of mainstream music. It’s hard even trying to make a buck because kids are just brainwashed by radio stations that stay on repeat all day you know? But I really do feel like I can change the way the scene looks like now. I know it’s a milestone but I came from nothing and I know how it feels to be alone.

2020 has been a bit of a write-off but can we expect more from Ranuimarz this year?
I remember when Tupac said “expect me like you expect Jesus to come back” so yes expect it, I’m coming.

Anything you would like to add? (shout outs, other info etc)
Shouts out to all the followers that be peeping the music I appreciate it 💙
Also Peter Pedro for filming ‘A New Beginning’ – Check him out @afilmbypedro – Highly recommended for any artists keen to do music videos.
To my hood, Ranui, that is where my hearts at its where it all started.
To all my homies Shiraz & LSJ, my homie soufsyde.p, Tuhoea Tuteao, my brothers and my little sister too straight up love you guys.

Shout out Shelley for the opportunity to be on here, it’s a blessing. I hope nothing but the best for real.

West Side
Ranuimarz the future.