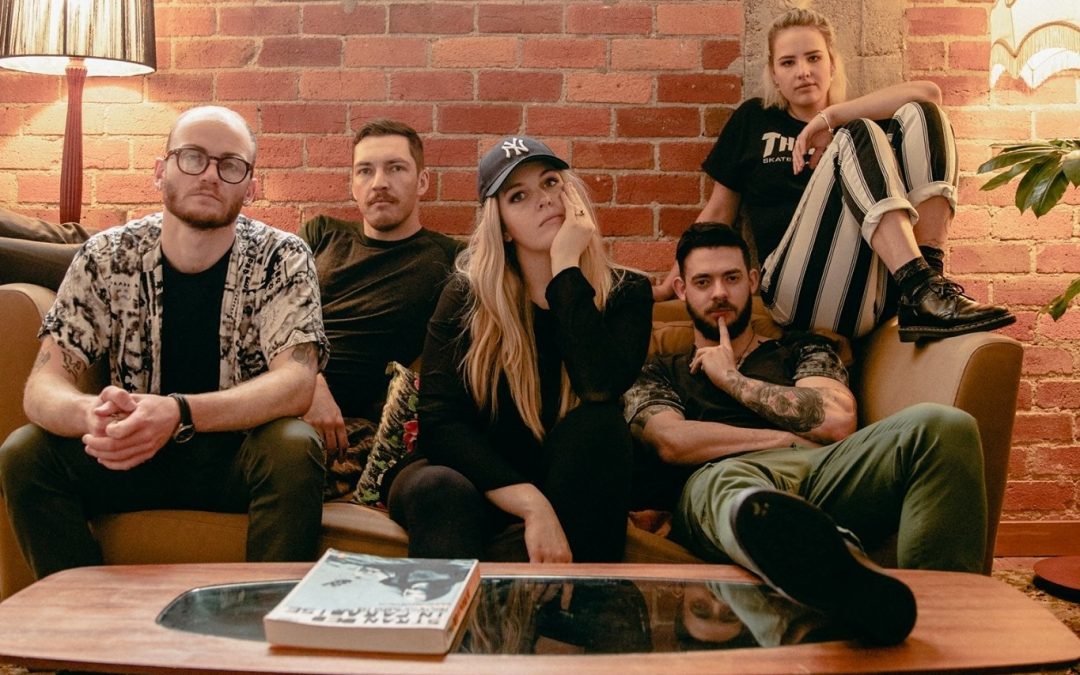 BEACHWARE – comprising of Rob Hartnell, Alexandra Selkirk-Hanna, Josh Nicholas, Julia Morris and James McDonald – have been making waves on the Auckland scene since mid 2017. They started as a group of friends who wanted to be part of a relaxed, DIY project.

The ‘DIY project’ has, however, grown to b so much more than that, earning a reputation as a tight, energetic live act, which has turned out a handful of cracking singles, including ‘Want Somebody’ and ‘Respite’, as well as their debut EP TWIN COAST DISC DRIVE and RNZ’s winning 2019 Christmas song ‘Take Away The Tree’. Watch BEACHWARE perform it live on RNZ.

CHECK OUT OUR CATCH UP WITH JOSH BELOW:

Happy NZ Music month – How did you initially get into creating music?
As individuals, we’ve all been making music for many years. Some of us have musical parents, some of us are self taught, it’s a real myriad!

In terms of BEACHWARE – Rob (guitars/vocals) put out an ad out in 2017, looking for people to add some colour and shape to the songs he’d been writing. James answered the call first, and was good friends with Josh (bass). Rob asked his good friend Alex (vocals/keys) to join in; we all had a jam and just loved the vibe. It was clear from the get go that we were not only creating something interesting, but that we were becoming pals.

Julia is a great friend and we were so impressed by her LEXXA stuff that, while Alex was away being kick ass and having a baby, she took up the mantle and ended up staying on to enhance the live soundscape

Tell us about your inspiration and motivation?
The BEACHWARE colourwheel is a diverse one –  from MUNA, to The Strokes, to Anna Calvi to Queens of The Stone Age and Massive Attack; our inspiration comes from all angles. It definitely helps put an interesting shimmer over our music!

Motivation-wise – It’s fun! Playing music with a bunch of great friends creates a feeling unlike any other. It also provides itself as a rock to cling to whenever and whatever is going on in your life. Self expression is important for humans, y’know? Plus, if someone tells you they enjoyed the song or show, it’s a lovely boost for the ego.

What have you been up to in this lockdown and how has it affected you?
Rob did a livestream on Live in the Lounge with Hallensteins, which was cool. We’re very lucky in that most of the band have a good set-up for recording and sending tracks to one another, We’ve continued to write and record music together, share ideas and drink Pals with each other on Zoom. We participated in a quarantine covers compilation that will be announced shortly! It’s certainly made us realise how much we enjoy playing music together live and being close to one another!

What do you think of the NZ Music scene?
Josh’s real talk answer: This is a huge question for us!

To be honest, the NZ Music scene is something that needs work in terms of diversity/representation. Every year we see festivals/shows that are a similar line-up, with hardly any/no womxn, or persons of colour. It’s something we take into consideration every time we book or promote a show/get artwork created, or produce a video. We want to include people and give a chance to those who are perhaps being unfairly overlooked.

That being said, NZ houses some great artists – the post-rock scene is pretty amazing (Bands like Jakob, Opium Eater) and we share stages with such a wealth of glistening pop and indie acts.

People are genuine. There always seems to be a sense that we’re all working together to help promote one another, rather than screw each other over.

Institutions like Smoke Free RockQuest and Tangata Beats mean that young people are perpetually getting involved in the music scene here, which is fantastic.

Goal board time –  where would you like to see yourself in a year’s time?
Well, considering the current climate – being able to actually play shows! To people. In person! Around NZ and any other country that has the capacity to do so. We always want to be refining our craft and releasing new music. We’re working hard to get back onto the festival circuit this summer.  If all goes to plan, then we will have finished our debut album!  Continuing to improve our live act and turning Alex’s infant son into our own personal monitor engineer would be ideal, too.

After generating a name for themselves on the local indie scene, Auckland five-piece BEACHWARE today release ‘The Arcade’ – the first single from their upcoming debut album.

Recorded at Auckland’s famed Roundhead Studios, ‘The Arcade’ is a slice of alt-indie-pop, perfectly balancing fast and energetic guitar, with three-part vocals, double-time keys, and in the words of the band themselves “the fastest arpeggiator setting we could find”.

This is good ole’ Kiwi power-pop at its finest!

The song itself is all about a friendship/romantic relationship going south. “It’s about being mature and knowing it’s not one person to blame, but actually, maybe it’s the other person who’s really at fault?! Nothing seems straightforward when love is involved, and sometimes the search for it can take a few turns,” says the band.