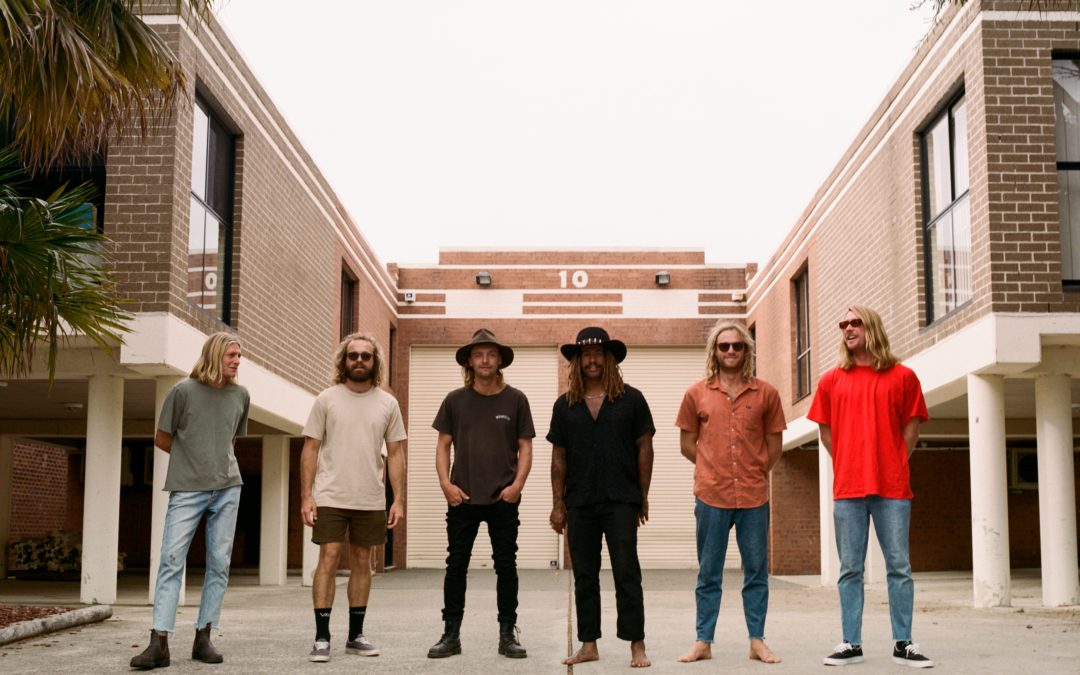 Australia’s funkiest musical export Ocean Alley are thrilled to announce their highly anticipated third album Lonely Diamond, out independently June 19. The news follows the premiere of their latest single from the record, ‘Hot Chicken’, on triple j this morning.

Grappling with spiralling out of control, ‘Hot Chicken’ encapsulates the seduction and suffering that comes from wrestling with the devil on one’s shoulder. Accentuated by the dangerous edge to vocalist Baden Donegal’s voice, ‘I’ll be the razor if you want to play’, the taunting driving guitars intensify the feeling to fight. Threaded with echoes of an Ennio Morricone Spaghetti Western score, the song’s expansive soundscape grows and conquers, transporting the listener to the middle of a dusty stand-off in a state of isolation and emptiness.

Drawing from the nostalgia of music eras past, Lonely Diamond combines 70s guitar rock, country and western, old school funk and synth-heavy new wave to create a deeply contemplative and atmospheric odyssey reminiscent of music legends including Fleetwood Mac, Dire Straits and Pink Floyd. From its sprawling opening notes, the record feels like a seamless progression following their last album, 2018’s Chiaroscuro, with exploration and escapism forming two central themes that unfold and transform across the 12 tracks. Guitarist Mitch Galbraith explains, “It’s pushing forward into the unknown… taking a journey to a different place or a different time that seems familiar or that you’ve been before and all the emotions and feels that come with that.”

There’s an ingrained familiarity with this record from the first listen – all the elements that define Ocean Alley’s sound are there, but more intricately arranged; new instruments are introduced, the production is pushed to new limits and the band has created complete synergy between each track. Album opener ‘Dahlia’ mystically sets the scene with an intergalactic introduction, while the introspective title-track ‘Lonely Diamond’ engulfs the listener in a wave of melancholy before finding purpose with warmth and tenderness. Hopefulness is intrinsically linked with these anxieties, feelings and experiences explored, and the bright and dreamy ‘Up In There’ creates an uplifting sense of reassurance that everything will be okay, with its soaring harmonies, swirling guitars and ethereal keys.

Produced by long-time collaborator Callum Howell at the idyllic Grove Studios (built by INXS’ Garry Gary Beers), Lonely Diamond follows the success of Ocean Alley’sacclaimed second full-length LP Chiaroscuro – (cert. Gold NZ). With its infectious blend of psychedelic surf-rock, the record propelled the band into national prominence and saw them sell 25,000 tickets over 15 sold out shows that year in Australia alone – culminating with their single ‘Confidence’ (cert. Gold NZ) taking out #1 in triple j’s Hottest 100 of 2018. Their breakthrough year was backed-up with 30 sold out shows around the world in 2019, major festival appearances at Reading & Leeds Festival (UK), Splendour In The Grass (AUS), Sziget (HU) and BottleRock (US).

Over 100,000 New Zealand fans have caught Ocean Alley live in the past year across their own sold out six-date headline tour, Bay Dreams, and as main support on the behemoth SIX60 Saturdays. The band have amassed more than 250 million streams to date.