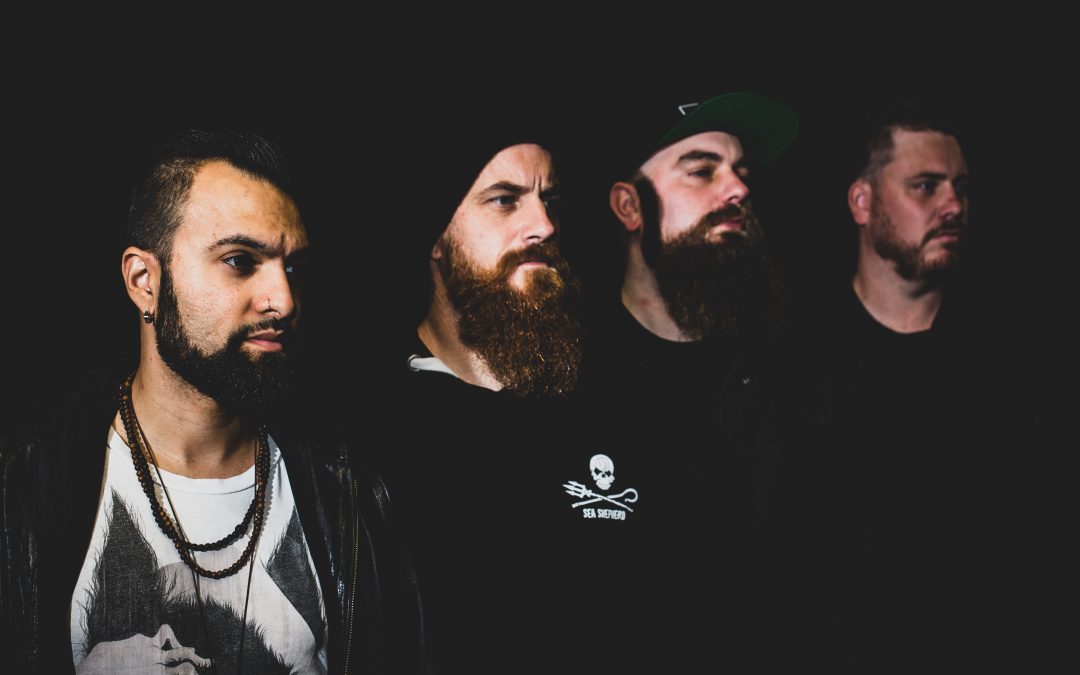 I’m going to start with the video on this one:
I love how it is made to be displayed vertically your phone! These days we are constantly on devices, particularly our phones. With videos, I find I go on youtube and rotate my device so it is full screen but there is no need to do that with this video. It also uses that space well and really crops the shots perfectly in the screen. The bold colouring and layered details really allow the video to have quite a punch, especially considering it is compacted to such a small space. And to add to that even more, though they could have just had the band performing & effects, which would have been enough, they have performers dancing and boxing throughout the video. There is a lot going on but it is done well and works really well with the track itself.

Now the song:
I mean it definitely has that “Coridian” sound. If you know these guys, you know what I mean. But in saying that, it is a bit different to what they usually do in the way that it seems smoother. It is as rock and grungy as I am generally used too. But I like it. I also think Dity (vocalist) seems to have really nailed his vocals on this one with the variation. That deeper moment at the beginning is very nice!

The track is amazing and I think this is really a step in the right direction for Coridian, Hopefully we can hear it live soon! And the video is such a high quality piece of work that is just so well done and really compliments the track. What a great release from these guys!

PLEASE WATCH THIS VIDEO ON YOUR PHONE

Coridian are an alternative rock group from Auckland, New Zealand. Today, they are announcing the release details for their forthcoming EP ‘Eldur’

‘Eldur’ is the third in a four EP series that the band began in 2015 with ‘Oceanic’. The four EP cycle covers off all of the Elements that comprise the Earth. The ‘Eldur’ EP will see its release into the world on Friday May 22nd and is available for Pre-Order now at https://smarturl.it/PreEldur.

The word Eldur is Nordic for Fire. The Raven brothers’ are of Nordic lineage. To celebrate the announcement of the ‘Eldur’ EP, Coridian have dropped a brand new, huge, anthemic rock single from the record, entitled ‘The Witness’, along with a filmclip for it – pre-save the new single here!

Coridian’s ‘Elements’ series of EPs are: Oceanic (2015), Caldera (2017), Eldur (2020) and Hava (TBA). The EPs not only represent the four elemental forces (Water, Earth, Fire, Wind) that make up the Earth, but also mirror the Band’s progress and development. Drummer Kris Raven explains, “With Oceanic, we were just a new band, all over the place, like a rough ocean, Caldera was the beginning of the band’s grounding and foundation for our sound, Eldur sees us rising up with fiery passion in our writing and performances and Hava – we will have ascended and at peace. Invisible, yet powerful.“

On top of the new single and announcing the EP, Coridian will also be releasing a Documentary series about the creation of the EP on their Youtube Channel in the lead up to the release of ‘Eldur.’ with episodes dropping Monday April 20th, Monday April 27th, Monday May 4th, Monday May 11th and Monday May 18th.
This new track “The Witness” was Recorded, Produced, Mixed & Mastered by Zorran Mendonsa(BlackList/City Of Souls) and the clip for it was co-produced by Dity Maharaj and Geoff Budd, and directed/animated by Mardo El-Noor.
Coridian have toured extensively around NZ, including their own headlining tours and performing with high profile NZ acts such as Devilskin, City of Souls, I AM GIANT, Skinny Hobos & Written by Wolves as well as international acts such as Skillet (USA), P.O.D (USA), Fuel (USA), Fozzy (USA), Sumo Cyco (CAN) & Red Sea (AUS).