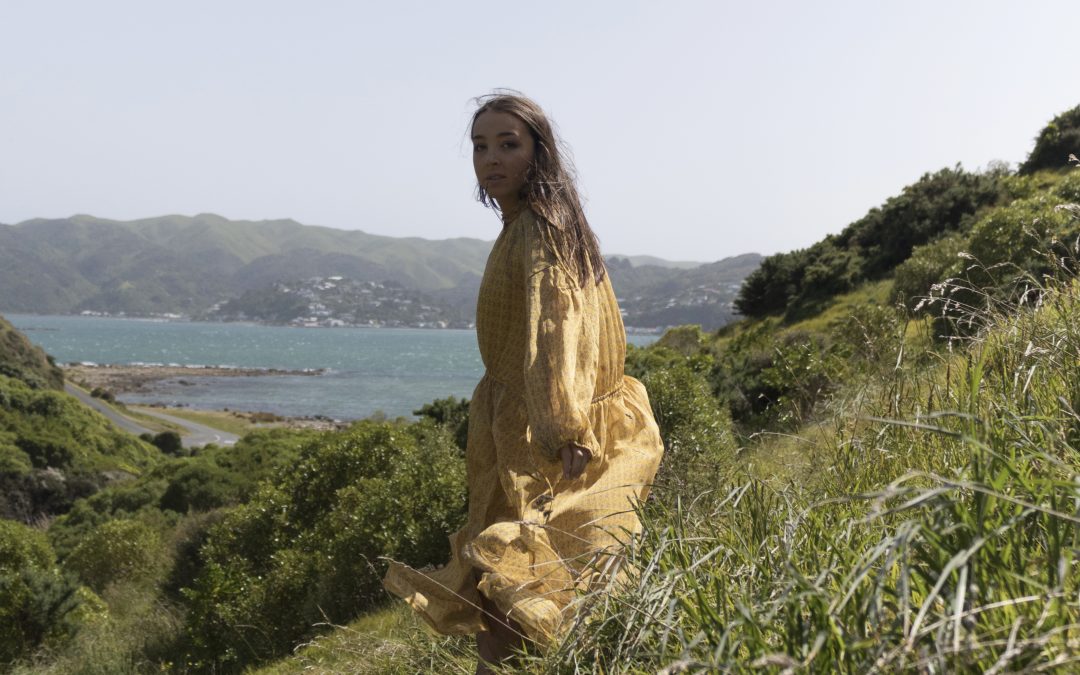 Moodscapes abound New Zealand’s indie-pop fantasizer, Sofia Machray as she hits the ground running with her anticipated debut single Handstands – an 80’s indie-pop summer classic which pulls on the heartstrings of pure melodrama.

Infused with shimmery guitar tones and lush vocal harmonies ‘Handstands’ opens up a world of nostalgic sound, allowing listeners to relate and reminisce with sounds that are timeless. The vibrant new release came about on a hot summer’s evening by the 20-year-old emerging artist and her bandmates, “I wrote the bones of the song in my garden one afternoon, I then took it to my band to help me piece together the rest of the puzzle.” She says. The quality of instrumentation from drummer Anna Wild, guitarist Robbie Pattinson, and bassist Devon Brassfield helped Sofia to craft the overall atmosphere of the track. The song is about embracing the chaos and messiness of adolescence, with a kiwi summer twist. Sofia’s powerful vocals paired with ghostly backing vocals blend seamlessly into the perfect conflicted message that her lyrics intended, leaving you with a bittersweet tang.

Recorded in Wellington, New Zealand, with producer and collaborator Robbie Pattinson and mixed/engineered by Surgery Studio’s Lee Prebble, the track has a sense of kiwi ingenuity about it. Lee has worked with artists such as Trinity Roots, The Black Seeds, Dave Dobbyn, and now Sofia to deliver the vibrant track.

The past year for New Zealand’s upcoming has been packed with shows and collaborations in preparation for her debut single. Sofia has always had a passion for songwriting, picking up a guitar at the tender age of five and a decade later performing her songs to large audiences. Since then Machray has a large focus on crafting atmospheric music with her band that is not exclusive to any type of listener or genre. Now, with her debut single ‘Handstands’, Sofia is fast at making a name for herself in the industry, being just the beginnings for the indie-pop up-comer.

Wellington’s based indie-rock artist ‘Sofia Machray’ will have you dancing with the daisies, stretching out over moody rockers and soft-burning hooks. Machray made a name for herself performing various shows around NZ and opening for indie-rock acts such as Racing. While studying music in Wellington she met guitarist Robbie Pattinson, who joined her alongside drummer Anna Wild and bassist Devon Brassfield to complete her lineup. Her sound shares similarities with indie legends such as Daughter, Middle Kids and Snail Mail but with notable differences.

Being unmatched in her sonic field Sofia is an electric master of the sing-songwriter gone rouge. The quality of instrumentation mixed with Machray’s uniquely raw vocal style evokes emotion within listeners allowing them to relate and reminisce with songs that are timeless. Machray has truly hit the ground running, releasing her vibrant debut single ‘Handstands’ which has gone on to top the alternative charts up and down Aotearoa.