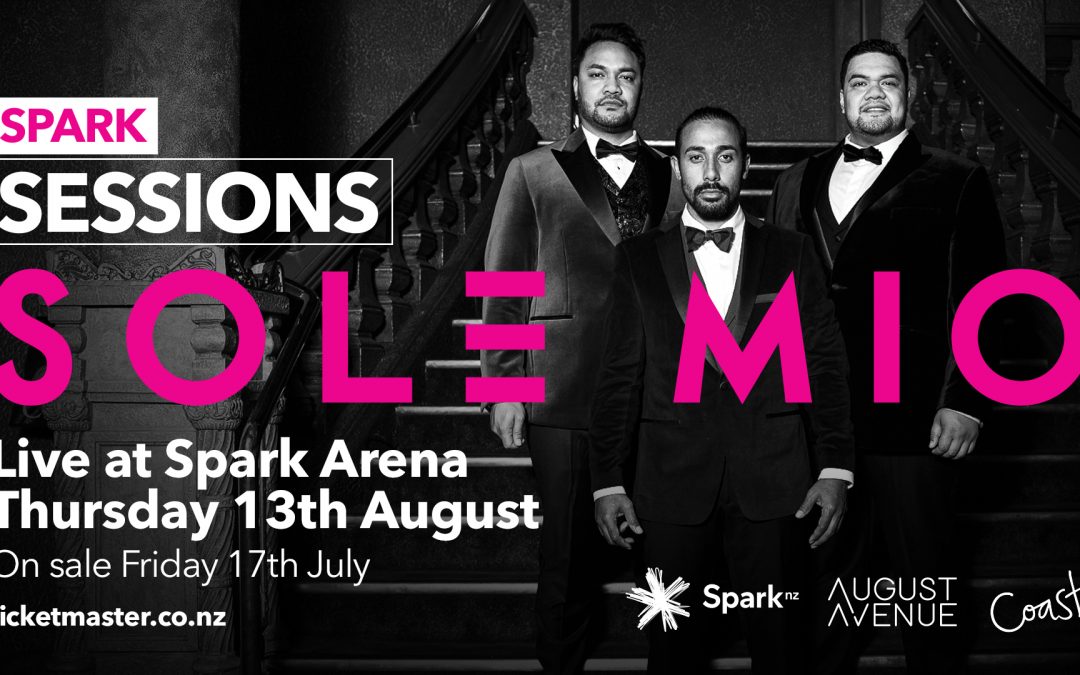 Following on from their hugely popular streamed Spark Session during New Zealand’s COVID-19 Lockdown, SOL3 MIO will perform their only concert for 2020 at Spark Arena on Thursday 13 August.

At SPARK SESSIONS: SOL3 MIO, the Kiwi trio will perform operatic arias with a live orchestra and treat the audience to their most popular songs and signature storytelling and humour.

Fans from outside Auckland will be able to see the show in a Spark Sessions live stream on Spark’s Facebook page.

Following their sold out SOL3 MIO: Back to Basics tours last year, their performances as a group have been few and far between as they travelled the world. Their individual careers continue to flourish, but after months of lockdown in France and then America, Pene Pati has flown home to join his brother Amitai Pati and cousin Moses Mackay for this one-off concert before he heads back overseas.

“We didn’t expect to be able to do any SOL3 MIO shows this year because of opera commitments in America and Europe, but with everything on hold in most countries, I decided to come home for this concert while I could,” Pene Pati said.

“We can’t wait to perform together again, and with an orchestra behind us it’s going to be a really memorable night, especially since it’s our only concert this year. We really hope all our Auckland fans and a few out of towners can make it because it’ll be a while before we see our fans again.”

“We can only do this one show in 2020, and since we can’t visit the rest of New Zealand this time, we’re grateful that Spark has made it possible to broadcast the show on Facebook,” Pene Pati said.

Following SPARK SESSIONS: SOL3 MIO, fans have an opportunity to see Amitai Pati in an opera setting when he makes his New Zealand Opera debut, starring as Jupiter in Handel’s baroque opera Semele, staged at the Holy Trinity Cathedral in September. Tickets for Semele are available at nzopera.com.

After losing work in America and Europe during lockdown, Pene Pati will leave New Zealand almost immediately after the concert to prepare for engagements at acclaimed Opera Houses in Europe. He will perform the title role in Mozart’s Mitridate for Berlin Staatsoper, sing solo recitals in Paris and Bordeaux, then perform in the rarely performed Fredegonde, by Saint-Saens in Dortmund, Germany – participating in the first ever recording of the work.

Moses Mackay remains based in New Zealand where he has been composing music for a forthcoming solo project. He gave fans a taste of his original songwriting with ‘Embers of Fire’, released online last month.

Tickets to this one-off concert go on sale at 9am on Friday 17 July via Ticketmaster. Spark customers have the chance to win the very first tickets to the concert now at www.spark.co.nz/music. Don’t miss this year’s only chance to see New Zealand’s favourite operatic group live in concert.

TICKETS ON SALE AT 9AM THIS FRIDAY AT TICKETMASTER