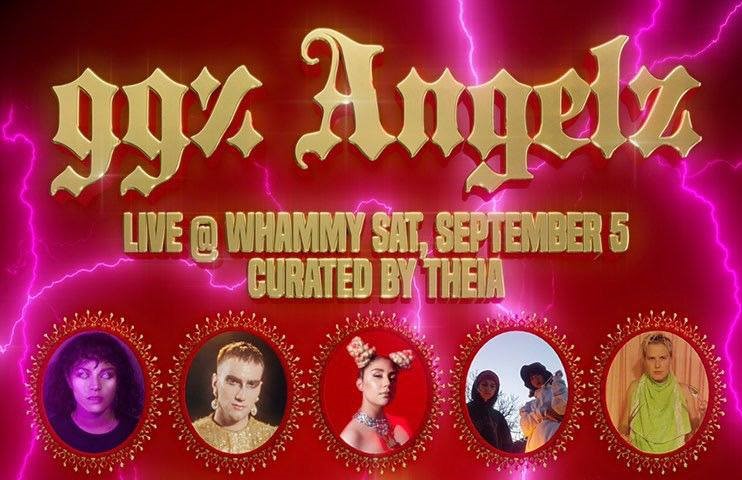 New Zealand’s very own queen of alt-pop Theia has curated a night at Whammy Bar on Saturday, September 5 celebrating Aotearoa’s rich and diverse music scene. The 99% Angelz line-up features performances by artists who are pushing boundaries and challenging the system.

They are Alexa Casino, Baby Zionov, Imugi, Randa and Theia. Get tickets here.

The 99% Angelz night takes its name and inspiration from Theia’s recently released mixtape and the remix pack, featuring re-works from electronic heavyweights such as LA’s Gurldoll, NZ’s Magik J and Australian artists/producers Oh Boy and Banoffee.

Theia herself will perform on the night and has invited a handful of her favourite artists to join in the party.

Hailing from Wellington, Alexa Casino is a sonic force to be reckoned with. Her track ‘Die Like a Rose’ is electronic-pop perfection. A darling of the bNets, Alexa Casino is all kinds of wonderful with her DIY vibe and as Noisey aptly summarises, her songs “make you cheer up and tear up”.

DJ, producer and songwriter Baby Zionov is without question one of the most exciting acts on the Auckland scene right now. Baby Zionov’s music is a love letter to queer club music through the ages, taking the listener on a journey of head-spinning, hyperactive dance-pop filtered through a nostalgic, psychedelic lens. She has just released her kick-ass EP  ‘… AND YOU ARE THE BITCH’.

Silky electronic duo Imugi 이무기 are the true example of an act that have made their mark on the underground but are now spreading their wings in the wider world. With a focus on embracing multi-culturalism and challenging Eurocentric structures within our culture, Imugi is a guiding light for the future of music in Aotearoa. Stay tuned for some exciting stuff from this hot duo this year.

Randa needs no introduction. But if you’ve been living under a rock, here’s what you need to know. Randa is a rapper. Randa’s real name is Mainard. Mainard identifies as non-binary / transmasculine. They enjoy making songs with friends, swimming under the sea and sipping soda drink. They are fire on the mic! Check out recent singles, Heatwave and Rock Bottom.

“I am so proud to have all these amazing acts on one bill. I hope that this reminds everyone of the incredibly diverse community of artists we have in Aotearoa music that are underrepresented in the scene at large but so rich in talent and ethos,” says Theia.

Theia is one of electronic/alt-pop music’s most idiosyncratic acts with a catalogue that showcases an artist who is unafraid to push boundaries both sonically and lyrically.

In May 2020, Theia put out her 99% ANGEL mixtape. Her first release as an independent artist, it shines the light on a much edgier, alternative side to her repertoire and has drawn praise from music sites such as Billboard Magazine, which described Theia as one of the most exciting voices to emerge from New Zealand in the past five years. Pure Nowhere said, “Her new mixtape is a sweltering collage of neon mixes, delectable hooks, and gut-punching bass. But, if you listen closely, you’re thrust into a movement [of] weaponizing club music and re-defining a genre”.

99% Angelz at Whammy feat. Alexa Casino, Baby Zionov, Imugi 이무기, Randa and Theia is a night not to be missed. Come party with the Aotearoa’s Angelz of the underground!

Tickets on sale now from Under the Radar HERE