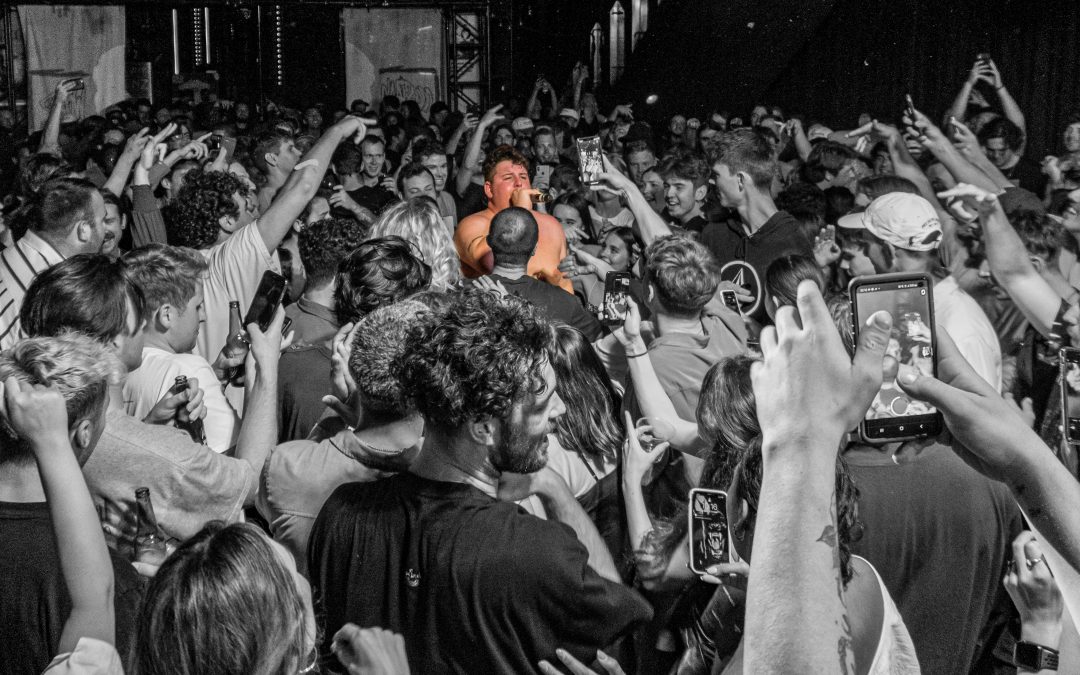 The amount of shows happening over Labour Weekend was getting crazy and just when I thought 3 was a lot, I forgot about Wax Mustang’s 2 shows! Which at this point were pretty much sold out. Sunday is a night I would usually be chilling at home, having a roast dinner and relaxing. But that was not the case, instead I was off to the Tuning Fork to catch Wax Mustang on his ‘Wax Mustang for President’ tour. As I arrived to the Tuning Fork there were only a few people hanging around. There were 2 Wax Mustang banners draped to each side of the room about halfway between the door and the stage which were very cool and looked to be hand-painted canvas.

Wax Mustang had 2 different support acts each night. On Saturday night it was 0800 but on Sunday night it was PollyHill – I am definitely glad I came on the Sunday. More and more people began to trickle in as she finally took the stage with Half Queen on the decks. The crowd numbers just grew during her performance. PollyHill moved about the stage and performed as though it was her headline show. The males in the front row shouting out  comments which essentially just made you want o go “ugh” but she shut them down and  was quick to put them in their place – I loved that! She also bought out Albi (unsure of spelling) who she claimed was “the best rapper in the AKL”. He didn’t perform too long but they definitely performed together well. As people began to vibe more and more, PollyHill picked the beat up and the crowd got hyped. I’m definitely a fan of PollyHill. She gives a great performance and really knows how to play a show!

Most of the crowd hardly moved between sets, clearly trying to hold their spots for Wax Mustang. It was about half an hour or so but the lights finally went out and his DJ took the stage (story I didn’t get a name). He was dressed in business attire and I realised this was sort of a thing with him and his crew. I’m assuming it ties into the presidential title of the tour. The stage was even lied around the back with fencing that had light boxes garnering images of Wax and his name.
When Wax Mustang finally took the stage he was also in a blazer and white shirt. I had seen him live before so I knew both layers would eventually come off. And sure enough, within 2 songs, they came off. The crowd was loving it! Some of the guys in the front even stripped down, some into white plain shirts and some just completely half naked. The crowd were almost on another level. Wax was chucked glasses which the crowd screamed at for him to put on and he teased that with an on and off cheer. Then he wore a cowboy hat and finally a guy jumped on stage to do a shooed next to him. You really didn’t know what to expect for the most part. The crowd was the interesting part for me honestly. And I think he felt that, jumping into the crowd and continuing to rap as he walked through them. I thought this was awesome as it gave everyone a chance to get closer to him, especially considering the front was quite squashed. He hardly stopped as the tracks just kept flowing. Before you knew it, it came to the end of his set. But he did do a walk-off encore and returned to the stage for one more track. The crowd flowed out of the venue after, no doubt to get some air because it did get really hot and sweaty for those at the front. But there was no denying, everyone had a great night!