Ziggy Alberts reveals collaboration with Horrorshow – I Won’t Give You Up EP! 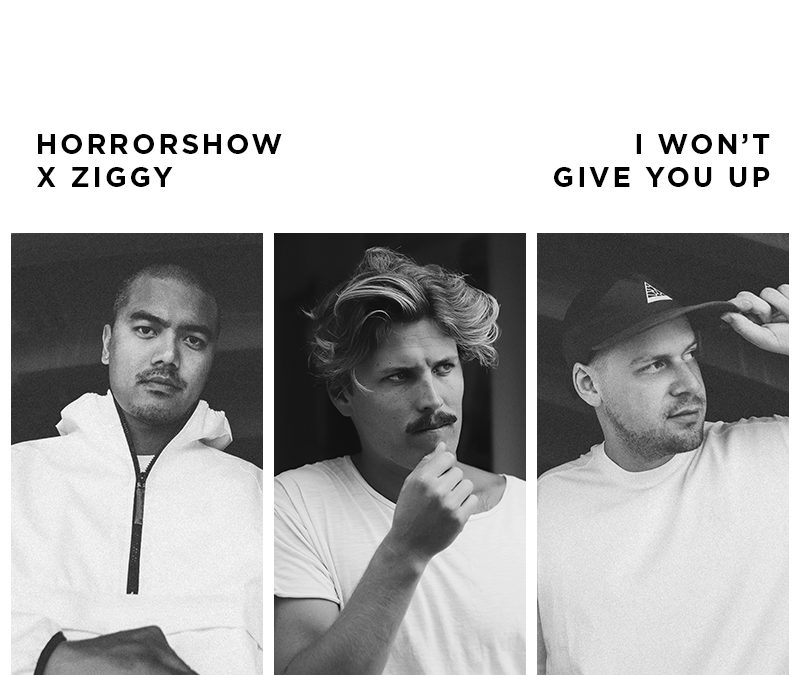 Australian indie singer-songwriter Ziggy Alberts has revealed a new cross-genre EP in collaboration with prolific Sydney rap duo Horrorshow, titled ‘I Won’t Give You Up’. The EP is Alberts’ first collaborative project and marks his third release for 2020, following singles ‘Together’ and ‘don’t get caught up’.

Lead single ‘Heaven Pt. II’ is a groove-filled, genre-bending track full of folk harmonies and hip-hop beats, adding an addictive new twist to one of Ziggy’s biggest hits. The live version, also included on the EP, features a special appearance from Kim Churchill.

Ziggy Alberts has been a long-time fan of Horrorshow, naming the duo as one of his biggest and earliest musical and songwriting influences. Since meeting in a Brisbane green room back in 2010, the artists have made guest appearances at each other’s shows, and have developed this EP as a passion project, as well as a full-circle moment in their friendship.

“‘I Won’t Give You Up’ pays homage to being of different genres, different upbringings, but having similar intentions,” said Ziggy. “It’s a celebration of differences, and two different worlds coming together. I think Horrorshow is one of the most legit rap duos Australia has ever seen, and it’s truly an absolute treat to collaborate with them on something like this.”

Along with ‘Heaven Pt. II’, the EP includes a live version performed at Brisbane Riverstage, as well as a cover of Horrorshow’s 2009 track ‘Walk You Home’ performed by Ziggy.

“A big part of what makes this EP so special is that in a way it’s been over a decade in the making,” said Solo from Horrorshow, “From the days when I would read comments on our burgeoning Facebook page from a young kid on the Sunshine Coast with the fairly memorable name of Ziggy Alberts. Over the years, this polite young surfy kid would attend our shows in the area with his mates, and through this, we struck up a friendship while I watched his journey as a singer-songwriter grow into what it is today.”

At only 25 years-old, Ziggy Alberts is constantly pushing boundaries for self-funded independent artists. His successes so far include the release of five records, starting his own label Commonfolk Records, and playing sold out shows across the world; effortlessly attracting millions of listeners. In 2018, Ziggy released his fifth record LAPS AROUND THE SUN, which was premiered on Billboard Magazine and landed the coveted ‘Album of the Week’ spot on triple j. In the first week after release, the album charted to #2 on the ARIA Australian Artist Album Charts.

Horrorshow are a hip hop duo from Sydney, Australia, comprised of Solo (Vocals) and Adit (Producer). In eight years they’ve released three studio albums, sold-out a stack of tours, received nominations for numerous awards, and cultivated one of the most loyal and dedicated fan-bases in Australia.

Emerging in 2008 with an album largely created in high school, Horrorshow promptly signed to Elefant Traks and released ‘The Grey Space’, which received immediate industry recognition with an ARIA nomination and a run of support slots on national tours. Horrorshow’s honesty and musical ingenuity amassed a fast-growing legion of passionate fans in the following years, and has seen them venture for international tours and achieve worldwide recognition.

‘I Won’t Give You Up’ is available on all platforms now.

“Folk-hewn but modern-facing, his work sits alongside those early Ben Howard cuts or even Jack Johnson, that kind of slick but still endearingly earnest musicality.” – Clash, UK

“Ziggy Alberts: The golden boy who busked his way to success.” – Triple J

“Youthful songwriter Ziggy Alberts’ sound has been described as ‘coastal folk’. It’s an apt description, with ‘Laps Around The Sun’ demonstrating both the warmth and loneliness of the coast.” – Songwriting Magazine